This sale is for The Rounder (1930) starring Jack Benny on DVD.

5.6
Director: J.C. NugentWriters: J.C. Nugent, Ralph SpenceStars: Jack Benny, Dorothy Sebastian, George K. ArthurSummary: Bartlett, a well dressed but drunk man, is able to convince a policeman passing by that the ladder he has set up to a second floor apartment building window is him trying to get into his own home. When he gets to the top of the ladder and into the room, he finds that it isn't his apartment, but that belonging to a beautiful young woman. She is socialite Ethel Dalton, who has just had an engagement-breaking argument with her fiancé, Alfred Brown, as she saw him seemingly cavorting with another woman. Despite being initially frightened by this strange young man in her apartment, she offers him a proposition: with a generous monthly stipend, marry her in name only, although they are to act married in public but not in private. He accepts. The next day when Ethel and Bartlett are to get married, she learns that what she saw Alfred doing with the other woman was innocent. The result is an unusual love triangle of sorts as Bartlett is still in the picture. That same policeman from the night... Written by Huggo
Also known as: The Rounder (on a region-free DVD). 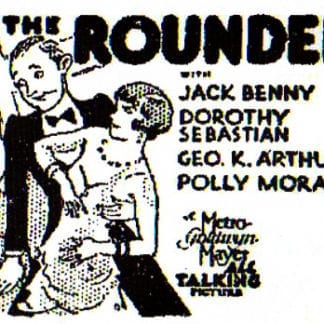