This sale is for Politics (1931) starring Marie Dressler on DVD.

6.4
Director: Charles ReisnerWriters: Zelda Sears, Malcolm Stuart BoylanStars: Marie Dressler, Polly Moran, Roscoe AtesSummary: Middle-aged, small-town widow Hattie Burns is angered when a friend's daughter is inadvertently killed by s stray bullet in a gangland shootout at a local speakeasy. When Hattie confronts the mayor, a political hack running for re-election, at a campaign event about closing the illegal operations down, he brushes her off as only a woman. Other women at the rally draft her as a rival candidate with best-friend Ivy as campaign manager and female voters go on a "Lysistrata"-like parlor, bedroom, and bath strike in order to insure Hattie's election. Unfortunately, Hattie does not know that her daughter Myrtle's boyfriend, a reformed but wounded hoodlum, is hiding out in her attic. Written by [email protected]
Also known as: Politics (on a region-free DVD). 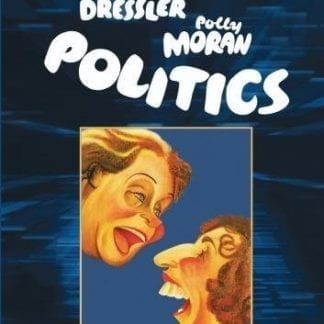