6.6
Director: Christian BlackwoodWriters: Richard Kozarski, Elliott SteinStars: Allan Arkush, Paul Bartel, David CarradineSummary: Known as "The B-Movie King", Roger Corman's filmography has paved ways for genre films, igniting the screen with his rambunctious exploitation cinema. This portrait, made by Christain Blackwood who at the time was an aspiring filmmaker himself, takes a closer look at Corman's plentiful career. Corman's early casts and crews were oftentimes bursting with young talent such as Martin Scorsese, Jonathan Demme and David Carradine. His horror-comedy hits were made in such fast succession that the opportunities for emerging directors were countless and though the pay was low many of them feel they were very much compensated in experience and recognition. Through his low production budgets and high box office revenues, Corman built a B-movie empire that continues to thrill, inspire and endlessly entertain. Written by Michael Blackwood Productions
Also known as: Roger Corman: Hollywood's Wild Angel (on a region-free DVD). 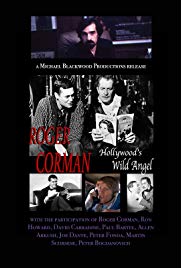