This sale is for Poker Alice (1987) starring Elizabeth Taylor on DVD.

6.2
Director: Arthur Allan SeidelmanWriters: James Lee BarrettStars: Elizabeth Taylor, Tom Skerritt, George HamiltonSummary: Alice Moffit, "Poker Alice" (Dame Elizabeth Taylor), has been disowned by her Boston, Massachusetts family because of her incurable penchant for gambling. She is travelling the West with her cousin, John Moffit (George Hamilton), when she wins a house in a poker game on a train. The "house" turns out to be a bordello, which she decides to run until she can sell it. She falls for a bounty hunter, Jeremy Collins (Tom Skerritt), who is about to settle down in California. Marrying him would mean ending the life-long relationship between the two cousins. Written by Herman Seifer <[email protected]>
Also known as: Poker Alice (on a region-free DVD). 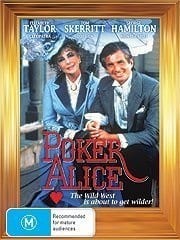