This sale is for Out California Way (1946) starring Monte Hale on DVD.

6.2
Director: Lesley SelanderWriters: Betty Burbridge, Barry ShipmanStars: Monte Hale, Lorna Gray, Robert BlakeSummary: An interesting oddity in Republic's B-western series but certainly not the first or only time the studio used a movie set as the backdrop of a plot line. Newcomer Monte Hale is tying to just get a job in western films when he meet young Danny McCoy and his sister Gloria. Danny is trying to get his horse, "Pardner" into films. Monte sings a song and "Pardner" does some tricks and a casting director notices. Monte gets a singing-cowboy role and the horse gets a bit, but there is an accidental explosion, engineered by western star Rod Mason, who is jealous of Monte, and the horse is badly scared and blows his lines. Monte takes care of Sheridan in some hand-to-hand fisticuffs and "Pardner", trouper that he is, recovers and performs as expected. Republic contractees Roy Rogers and Dale Evans drop by and sing a song while "Trigger" upstages "Pardner" with some tap-dancing, and Donald Barry and Allan Lane drop by and say 'hidy." Written by Les Adams <[email protected]>
Also known as: Out California Way (on a region-free DVD). 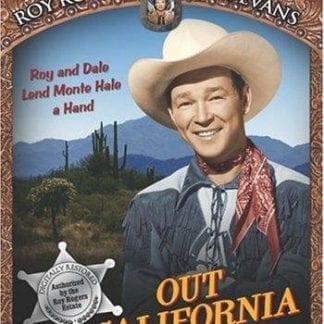