This sale is for Smoky Canyon (1952) starring Charles Starrett on DVD.

6.0
Director: Fred F. SearsWriters: Barry ShipmanStars: Charles Starrett, Jock Mahoney, Danni Sue NolanSummary: Government agent Steve Brent, alias the Durango Kid(Charles Starrett) gets involved in a range war between cattlemen and sheepmen in Timber Rock. Cattlemen sluaghter their herds to keep the prices high---Economics 101---and blame the destruction on the sheepmen---Plot Device 6. Jack Mahoney (Jock Mahoney as Jack Mahoney), leader of the sheepmen, is falsely accused of killing rancher Jim Woodstock (Frank O'Connor), which leads Woodstock's daughter, Roberta (Dani Sue Nolan,somewhat miffed at Mahoney and she breaks their engagement. Brent joins the cattlemen, as a ruse, to find the real killer. Smiley Burnette sings a song called "It's Got To Get Better", but it doesn't. Written by Les Adams <[email protected]>
Also known as: Smoky Canyon (on a region-free DVD).
Source: imdb.com 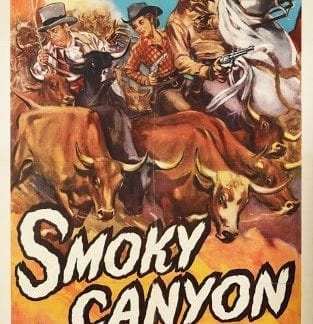