This sale is for Lifeforce (1985) starring Steve Railsback on DVD.

Director: Tobe HooperWriters: Colin Wilson, Dan O'BannonStars: Steve Railsback, Mathilda May, Peter FirthSummary: The space shuttle Churchill is assigned to observe Halley's Comet under the command of Colonel Tom Carlsen. They see a strange form attached to the comet and Carlsen goes with a team to investigate. They find three humanoid life forms in caskets and they bring them to the Churchill. However, Earth loses contact with the shuttle and the Space Research Center sends another spacecraft to search the Churchill. They find the crew dead and the shuttle burnt and one rescue pod missing. They bring the humanoids to Earth and soon Dr. Hans Fallada and his team discover that the Space Girl is a sort of vampire and drains the life force from people, transforming them into zombies. When the authorities find that Colonel Tom Carlsen has survived, they summon him to explain what happened in the Churchill. Carlsen tells an incredible story about the three aliens and he teams up with Colonel Colin Caine trying to save mankind from the evil vampires from space. Written by Claudio Carvalho, Rio de Janeiro, Brazil
Also known as: Lifeforce (on a region-free DVD). 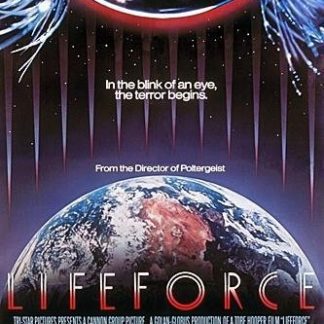