This sale is for Death Wish 3 (1985) starring Charles Bronson on DVD.

Director: Michael WinnerWriters: Don Jakoby, Brian GarfieldStars: Charles Bronson, Deborah Raffin, Ed LauterSummary: Despite Lieutenant Frank Ochoa's order to leave New York permanently in Death Wish (1974), Paul Kersey is back in the city to visit an old friend after taking down Nirvana's gang of savage thugs in Death Wish II (1982). But, death seems to follow the grizzled executioner, and after a shocking discovery, Kersey cuts a deal with the Police Chief, Richard Shriker: kill as many creeps as he wants, provided that he keeps the police informed. This time, Paul means business, and as the sadistic gang of the unhinged sociopath, Manny Fraker, terrorises the tenants of a run-down tenement building, and the entire neighbourhood, Kersey's brand-new .475 Wildey Magnum alone is not going to cut it. Can "The Vigilante" bring peace back to the once-quiet region? Written by Nick Riganas
Also known as: Death Wish 3 (on a region-free DVD). 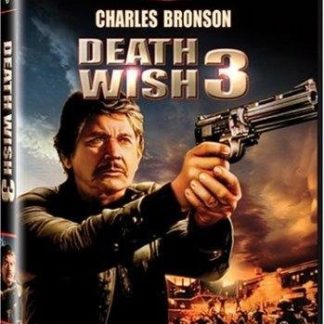