This sale is for Crime and Punishment (1935) starring Peter Lorre on DVD.

7.0
Director: Josef von SternbergWriters: Joseph Anthony, Fyodor DostoevskyStars: Edward Arnold, Peter Lorre, Marian MarshSummary: Roderick Raskolnikov, a brilliant criminology student and writer, becomes embittered by poverty and his inability to support his family. When he sees a desperate prostitute, Sonya, degraded by a vicious pawnbroker, Raskolnikov, a proponent of the idea that some people are imbued with such intelligence that the law cannot be applied to them as to other people, decides to rid the world of the pawnbroker and thus save his family and Sonya as well from the fate poverty forces on them. When Porphiry, the police detective investigating the murder, encounters Raskolnikov, he finds a man nearly crippled by the guilt and paranoia his deed has burdened him with. But Raskolnikov clings with as much coldness and calculation as he can muster to his guiding idea, that some crimes ought not to be punished. Written by Jim Beaver <[email protected]>
Also known as: Crime and Punishment (on a region-free DVD). 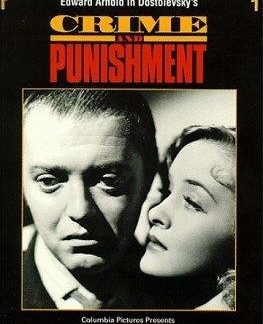