This sale is for Tarnished (1950) starring Dorothy Patrick on DVD.

6.2
Director: Harry KellerWriters: John K. Butler, Eleanor R. MayoStars: Dorothy Patrick, Arthur Franz, Barbra FullerSummary: Bud Dolliver, a former WWII hero, and an ex-convict, returns to his home town in an effort to make a new life for himself but, even with the help of Lou Jellison, a cannery worker, he finds it hard to live down his reputation. He manages to get a job at Kelsey's Boat Yard because an accident caused by Kelsey Bunker's no-good son, Junior, endangered Bud's life and revealed his excellent war record. He does well at the job, but Joe Pettigrew (NOT PLAYED by Gig Young), personnel manager of the cannery, is jealous of Lou's feeling for Bud. He frames Bud for a robbery committed by himself and Junior Bunker. Bud's alibi is weak because he is trying to protect Lou's reputation as they were out of the state, on the robbery night, trying to get married. Written by Les Adams <[email protected]>
Also known as: Tarnished (on a region-free DVD). 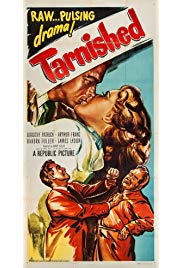