Blood on the Land (1966) with English Subtitles on DVD


This sale is for Blood on the Land (1966) with English Subtitles on DVD.

7.6
Director: Vasilis GeorgiadisWriters: Nikos FoskolosStars: Nikos Kourkoulos, Mairi Hronopoulou, Giannis VoglisSummary: Under the scorching sun of June in turn-of-the-twentieth-century Thessaly, Odysseas Chormovas--the untamed and proud son of a powerful squire--returns to his birthplace to reunite with his father and older brother, Rigas, after a four-year-long imprisonment in Nafplio. Against the backdrop of a bitterly silent social turmoil, it is a common secret that, once more, an irrepressible rebellion followed by a violent confrontation for the equal sharing of the land boils over--a dangerously tense and volatile situation fanned by the preaching of a single man: the defiant intellectual, Marinos Andipas. But, this blessed soil is nourished by the sweat, the tears, and the innocent blood of the long-suffering field workers, men and women, and no power on this earth can suppress their voice. Can the furious blood spilled on the land appease the dead? Written by Nick Riganas
Also known as: Blood on the Land (on a region-free DVD). 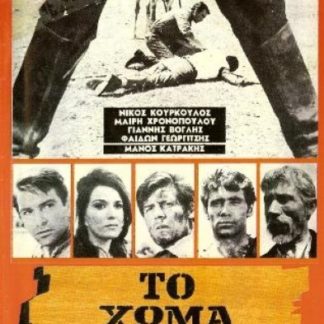