5.1
Director: Richard FleischerWriters: Arthur M. Loew Jr., Harold Jack BloomStars: Gig Young, Jean Hagen, Polly BergenSummary: M-G-M's first 3-D production shot at a rodeo in Tucson, Arizona is a story surrounded by objects flying into the camera. The story takes place in one day between the rodeo events where bronc buster Gig Young has left his wife, Polly Bergen, for rodeo-follower (i.e., "groupie" for those born since the sixties) Barbara Lawrence. The reconciliation of Young and Bergen is brought about by Harry Morgan (still being billed as Henry Morgan), an over-the-hill bronc buster now reduced to being the show's clown. (Rodeo clowns are usually the most disciplined, most valuable to the welfare of the rodeo cowboys and best-trained of all rodeo performers but Hollywood always showed them as down-and-outers.) Morgan of course has a pretty wife, Jean Hagen, and a little boy, Lee Aker, and anybody watching this film and not guessing who is going to get killed just hasn't been exposed to enough scripts from Hollywood set around a rodeo arena. Written by Les Adams <[email protected]>
Also known as: Arena (on a region-free DVD). 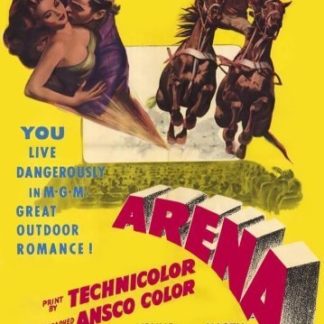