West of the Brazos (1950) starring James Ellison on DVD


This sale is for West of the Brazos (1950) starring James Ellison on DVD.

6.1
Director: Thomas CarrWriters: Ron Ormond, Maurice TombragelStars: James Ellison, Russell Hayden, Raymond HattonSummary: Trailed by Marshal Charley Blythe (Stanley Price), who thinks they are part of the Cyclone Kid (John Cason)bandit gang, Shamrock Ellison (James Ellison) and Lucky Hayden (Russell Hayden), are attacked by the outlaws. Blythe helps the pair drive off the outlaws but is wounded in the process and stops to recuperate. The Cyclone Kid has plans to take over an oil-rich ranch, which by right belongs to Shanrock, though he doesn't know it. Learning of the situation, Shamrock and Lucky go to court to protect Shamrock's claim, which is refused, and and are arrested on suspicion of the missing Blythe's murder. Written by Les Adams <[email protected]>
Also known as: West of the Brazos (on a region-free DVD). 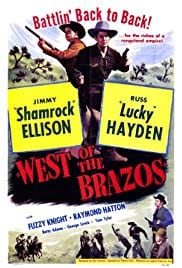