3.6
Director: M. David Lee IIIWriters: M. David Lee IIIStars: Randy Allen, Amy Applebaum, Michelle DardisSummary: This movie was produced before the Internet made sexual pornography widely available online. This movie was produced before the Internet allowed web-cam girls to strip, dance, or perform sexual stimulation online for male clients watching. During that time period, perverted or lonely men called 900-sex-chat telephone numbers to indulge in sexual conversations or fantasies with female operators. The movie's plot involves two detectives wondering if a serial killer is responsible for three similar murders. The three victims are shot in the head while in sexual flagrante delicto. Eventually, the detectives focus their investigation on Paula, an attractive operator, who works through the 1-900-LOVE ME service. In the end, things don't work out well for both Paula or both detectives. Written by Joe Duffy (I)
Also known as: 1-900 (on a region-free DVD). 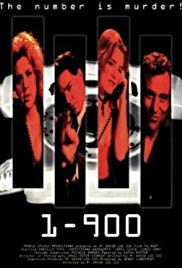