This sale is for Zorro’s Fighting Legion (1939) starring Reed Hadley on DVD.

7.2
Director: John English, William WitneyWriters: Ronald Davidson, Franklin AdreonStars: Reed Hadley, Sheila Darcy, William CorsonSummary: It'a 1824 and Don Del Oro, a man completely hidden in a suit of armor, plans to become emperor of Mexico. Don Diego arrives and as the masked Zorro takes up the fight. He organizes the Legionnaires to fight Del Oro's henchmen and the Yaqui Indians. CHAP. 1, GOLDEN GOD: An explosion sends a landslide down on Zorro. CHAP. 2, FLAMING Z: Zorro is trapped in a building as it explodes. CHAP. 3, DESCENDING DOOM: Zorro is trapped in an elevator shaft with the car plummeting down at him. CHAP. 4, BRIDGE OF PERIL: Zorro is on a narrow suspension bridge when the suport ropes are cut. CHAP. 5, DECOY: Zorro is on a wagon that explodes. CHAP. 6, ZORRO TO THE RESCUE: Zorro is locked in a dungeon cell with a moving wall that is about to crush him. CHAP. 7, FUGITIVE: Zorro falls beneath a runaway stagecoach. CHAP. 8, FLOWING DEATH: Zorro is in a mine shaft when an avalanche of water is released. CHAP 9, GOLDEN ARROW: A man at close range shoots an arrow at the unsuspecting Don Diego. CHAP. 10, MYSTERY... Written by Maurice VanAuken <[email protected]>
Also known as: Zorro's Fighting Legion (on a region-free DVD). 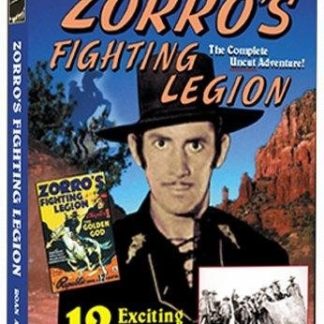