This sale is for Yukon Manhunt (1951) starring Kirby Grant on DVD.

5.3
Director: Frank McDonaldWriters: William Raynor, James Oliver CurwoodStars: Kirby Grant, Chinook, Gail DavisSummary: Canadian Mountie Rod Webb (Kirby Grant) has been assigned to the case where three messengers carrying Kenmore Mine payrolls have been robbed and murdered. He travels to the mine on a train with Jane Kenmore (Gail Davis), niece of the mine owner; payroll messenger Brown (Richard Barron; an armed guard named Le Clerque (John McGuire) ; and a young mining engineer, Len ('Rand Brooks')), and his sister Polly (Margaret Field). Someone sneaks chemicals in the stove and, in the confusion, Brown and the conductor are killed and the payroll vanishes. Rod uncovers evidence that Kenmore and his niece, with the help of Le Clerque, have been robbing their own payrolls. Written by Les Adams <[email protected]>
Also known as: Yukon Manhunt (on a region-free DVD). 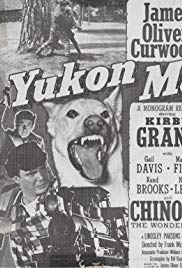