Winnetou and Old Firehand (1966) with English Subtitles on DVD


This sale is for Winnetou and Old Firehand (1966) with English Subtitles on DVD.

5.2
Director: Alfred VohrerWriters: Karl May, David De ReszkeStars: Pierre Brice, Rod Cameron, Marie VersiniSummary: The Silers' gang is chasing Apache Chief Winnetou and his sister Nscho-chi, after having killed several Apaches to steal their horses. Winnetou and his sister run into a group of trappers led by Old Firehand. The trappers help Winnetou and his sister Nscho-chi evade the Silers' gang. Together, they head for the border town of Miramonte. In Miramonte, the Mexican Sergeant Mendozza and his men have captured and imprisoned Billy-Bob Silers, the young brother of the Silers' gang leader. The locals fear an attack by Silers' gang that wants to free Billy-Bob. But Sergeant Mendozza refuses to release the bandit's brother. Also in town are Old Firehand's former girlfriend Michèle Mercier and her son Jace Mercier. When they meet in town, they're surprised but happy to meet again. Old Firehand wants Michèle back in his life but she's reluctant to be involved with a trapper whose life-style is more wild than settled. When Michèle accidentally reveals that her son is also Old Firehand's son, they... Written by nufs68
Also known as: Winnetou and Old Firehand (on a region-free DVD). 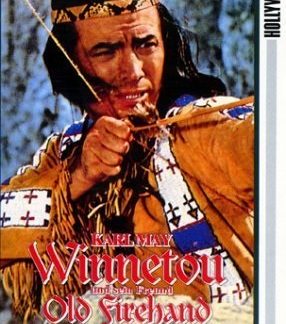