Who’s Singin’ Over There? (1980) with English Subtitles on DVD


This sale is for Who’s Singin’ Over There? (1980) with English Subtitles on DVD.

8.9
Director: Slobodan SijanWriters: Dusan KovacevicStars: Pavle Vuisic, Dragan Nikolic, Danilo 'Bata' StojkovicSummary: On April 5, 1941, a date Serbs will recognize, men on a country road board Krstic's bus for Belgrade: two Gypsies who occasionally sing about misery, an aging war vet, a Nazi sympathizer, a dapper singer, a consumptive, and a man with a shotgun. Krstic is a world-weary cynic, out for a buck; the driver is his son, the simple, cheerful Misko. En route they pick up a priest and young newlyweds going to the seaside. Along the way, mis-adventure strikes: a flat tire, a rickety bridge, a farmer who's plowed the road, a funeral, two feuding families, an army detail, and a lost wallet slow the bus and expose rifts among the travelers. On April 6, amid rumors of war, they reach Belgrade... Written by <[email protected]>
Also known as: Who's Singin' Over There? (on a region-free DVD).

Be the first to review “Who’s Singin’ Over There? (1980) with English Subtitles on DVD” Cancel reply 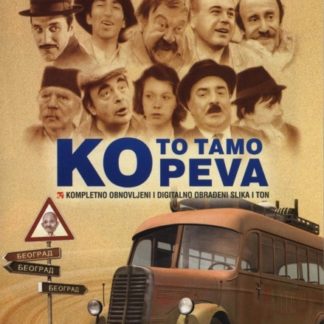