This sale is for White Epilepsy (2012) with English Subtitles on DVD.

6.1
Director: Philippe GrandrieuxStars: Jean-Nicolas Dafflon, Dominique Dupuy, Hélène RocheteauSummary: In faint light, a body slowly moves, breaking out from total darkness. Then a second body, a woman. Dream or nightmare? Archaic or essential? Desire or struggle? A journey through the night and the light to the confines of sense and vision.They are ghosts - do they really exist? A film like a dream or a nightmare. In the middle of a forest, two naked bodies, those of a man and a woman, perform a very slow and hideous choreography. It looks like an age-old ritual about domination and submission. The male ghost withdraws, but the woman doesnt let him go: she throws herself at him.Philippe Grandrieux, the maker of Sombre (1999) and countless other films, often experimental, shows the ceremonial wrestling in slow motion, with the bodies sometimes seeming no more than a collection of muscles, tendons and pale flesh, as in paintings by Francis Bacon. Apart from being terrifying and violent, the dance occasionally looks sensual.
Also known as: White Epilepsy (on a region-free DVD). 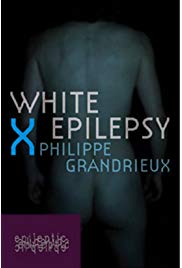