3.7
Director: Ted PeshakWriters: Robert Chapin, Patricia KealyStars: Bill Fein, Marilyn Fisher, Bunny KacherSummary: The issue of popularity, specifically amongst the high school set, is dramatized. Jerry occasionally goes on dates with Ginny, who goes on "sitting in parked cars" dates with many boys, which makes Jerry feel less special. When Ginny comes by and wants to sit with the gang, they brush her off. Is she popular because she goes on these dates, or is the exact opposite the truth? Jerry is also attracted to the new girl in school, Caroline. He can't verbalize why he likes her, but all in the gang, including the girls, invite her to sit with them. But if Caroline is popular, it means that others, like Wally, are interested also in dating her. Jerry and Wally take two different approaches in asking Caroline on a date, with two different results based on their consideration of her feelings. Written by Huggo
Also known as: Are You Popular? (on a region-free DVD).

Be the first to review “Are You Popular? (1947) starring Bill Fein on DVD” Cancel reply 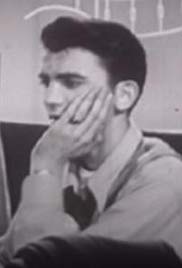