This sale is for Wharf Angel (1934) starring Victor McLaglen on DVD.

6.5
Director: William Cameron Menzies, George SomnesWriters: Frederick Schlick, Samuel HoffensteinStars: Victor McLaglen, Dorothy Dell, Preston FosterSummary: "Mother Bright's" place on the lawless, waterfront district of the 'Barbary Coast' in San Francisco is the toughest of all saloons that can be found, and that is where "Turk", a stoker on a freighter named "The Coyote", and his shipmates can be found when in port. They are there when Como Murphy, fleeing the law for a killing he did not commit, bursts in seeking a hiding place. Mother Bright directs him upstairs to a door that leads to another building, but Murphy opens the wrong door and finds himself in the room of "Toy," one of the many girls employed by Mother Bright in the event any of the sailors desires to purchase anything other than whiskey. "Toy" takes pity on Murphy and hides him when the police knock on her door. She and Murphy then talk the night away and are very much in love when the dawn breaks. "Turk" is also much smitten with "Toy" but the feeling isn't mutual. "Turk" gets Murphy a stoker's position on "The Coyote" and the two soon become close friends, and tell each... Written by Les Adams <[email protected]>
Also known as: Wharf Angel (on a region-free DVD). 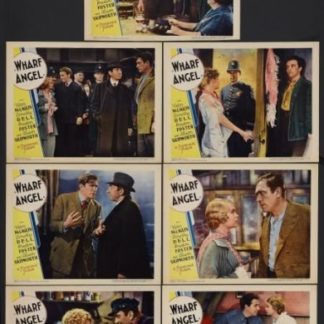