6.0
Director: Paul L. SteinWriters: Henry C. James, Karl RossierStars: Carol Raye, Peter Graves, Patricia MedinaSummary: Old Vienna, at a time when the waltz was considered an immoral dance. Maria promises her dying father, the Emperor, that she will follow the wishes of the Council of Ministers when she assumes the reign. Empress Maria wishes to marry the dashing Count Franz von Hofer, but the old fashioned Council advises against it due to his philandering reputation. The Prime Minister's daughter, Cenci Prohaska, asks Maria to help her marry her beloved Lieutenant Stefan Ravenne, because her father has plans for her to marry the rich, but boring, Ferdinand Hohenlohe. Cenci tells her that she wore a mask to waltz at the Golden Lantern and that von Hofer flirted with her there. So Maria hatches a plan to also visit the Golden Lantern in disguise. Written by Will Gilbert 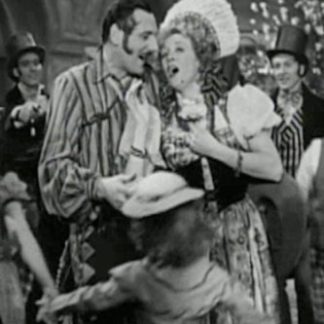