Cruisin’ Down the River (1953) starring Dick Haymes on DVD


This sale is for Cruisin’ Down the River (1953) starring Dick Haymes on DVD.

6.8
Director: Richard QuineWriters: Blake Edwards, Richard QuineStars: Dick Haymes, Audrey Totter, Billy DanielsSummary: Beaurefard Clemment, a New York night club crooner, inherits a broken-down Georgia showboat. He decides to turn it into a nightclub. He falls in love with Sally Jane, the granddaughter of Thadeus Jackson, arch enemy of Beau's late grandfather. Many, many songs and a parody of "Ten Nights in a Barroom" (a Blake Edwards touch), with music featuring the Bell Sisters. Written by Les Adams <[email protected]> 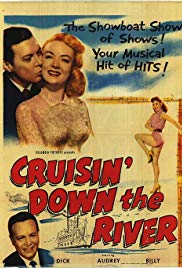