This sale is for Wagons West (1952) starring Rod Cameron on DVD.

6.2
Director: Ford BeebeWriters: Daniel B. UllmanStars: Rod Cameron, Noah Beery Jr., Peggie CastleSummary: Jeff Curtis (Rod Cameron), a wagon-master on his way to accept the job of leading a pioneer train from Joplin, Missouri to the Oregon territory, picks up Ben Wilkins (Michael Chapin), a young boy who has run away from the train because train captain Cyrus Cook (Frank Ferguson) wouldn't allow him to take his dog on the trip. He meets Ben's sister, Ann (Peggy Castle), and this leads to a conflict with Cook's nephew, Clay (Henry Brandon), who has his own plans for Ann that does not include her kid brother and his dog. The trip west has a lot of problems, mostly Indian raids by a tribe who are buying rifles from two members of the wagon train. Which two? Rest assured it ain't the kid and his dog. Written by Les Adams <[email protected]>
Also known as: Wagons West (on a region-free DVD). 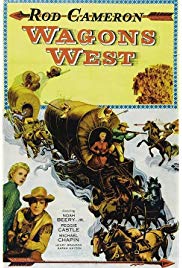