This sale is for ‘Wag kang lilingon (2006) with English Subtitles on DVD.

6.8
Director: Quark Henares, Jerry Lopez SinenengWriters: Ricardo LeeStars: Anne Curtis, Marvin Agustin, Raymond BagatsingSummary: "Wag Kang Lilingon is a twin-bill horror movie In the first story "Uyayi," Anne plays Melissa, a young nurse with a bright future ahead of her. But will the future turn to her favor as strange and violent events occur at the hospital she works for. Together with her boyfriend James, they try to uncover the killer behind the rising number of deaths among the patients in the hospital. But will she be one of the victims? Quark Henares megs the episode. In the second story "Salamin," Kristine plays Angel, a beautiful young family breadwinner whose only aspiration is to see her family live a better life. When her father left her and her mother and younger sister for another woman, Angel decided to move into a new place. Little did they know the danger that lies ahead. As she discovers an old mirror, she makes a wish at the stroke of midnight by the candlelight-to know her future. Instead she unwittingly opens a portal of spirits! What will be the repercussions of her actions? Jerry ... Written by star cinema
Also known as: 'Wag kang lilingon (on a region-free DVD). 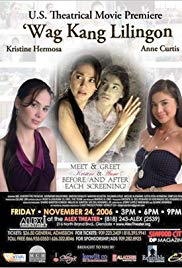