Director: Demian LichtensteinWriters: Eddie GuerraStars: Donald Faison, Eddie Kaye Thomas, Eddie GuerraSummary: They say what happens in Vegas stays in Vegas...well it's a whole other matter when you live there! Eric (Eddie Guerra) and Tara (Jaime Pressly), a couple living in Vegas are really in need of a major event -- to help them breakup already! He knows she's dating someone new, but can't let her go. Desperate to win back her heart, and convinced that his "unemployed" status is the cause of all their problems, Eric agrees to join his buddies Stu (Donald Faison) and Alex (Eddie Kaye Thomas), whose principle talents are scamming and avoiding adulthood, and with girlfriend problems of their own, when they discover the easy score of a lifetime-a boatload of casino chips sitting in a warehouse. The casino chips belong to old-school Vegas mobster Frank Santino (Jon Polito) and just happen to be counterfeit. If it happens in Vegas, it's bound to get messy! And when the score doesn't go exactly as planned, comedy and mayhem ensue as Alex is taken prisoner by the Santinos, while Eric and Stu end up... Written by Anonymous
Also known as: Venus & Vegas (on a region-free DVD). 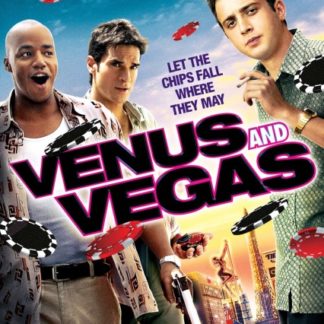