This sale is for Trapped by Boston Blackie (1948) starring Chester Morris on DVD.

6.5
Director: Seymour FriedmanWriters: Maurice Tombragel, Charles R. MarionStars: Chester Morris, June Vincent, Richard LaneSummary: When Boston Blackie's private detective friend Joe Kenyon is killed in an auto crash under suspicious circumstances, Blackie makes an offer to Mrs. Kenyon to take his place as a guard at a party given by the wealthy Mrs. Carter, who owns one of the world's most expensive pearl necklaces. His friend Runt goes along also. The necklace disappears while Mrs. Carter, accompanied by her dancing instructor Igor Borio, entertains her guests. Inspector Farraday is called in and finds (not to his great surprise as Blackie is always his first suspect) the pearls in Blackie's pocket. Blackie and the Runt make a hasty exit. Searching the apartment of Mrs. Carter's niece Doris Bradley, Blackie finds the pearls again, hidden in the lining of a coat belonging to Doris' friend Joan Howell who had been at the party and is in love with Borio. Investigating Borio, Blackie learns that the dancer's secretary, Sandra Doray, was connected with a jewel robbery in the south. He sets a trap for them, only to ... Written by Les Adams <[email protected]>
Also known as: Trapped by Boston Blackie (on a region-free DVD). 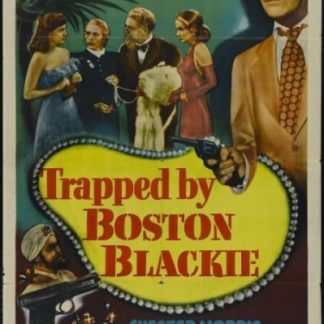