This sale is for Tornado Range (1948) starring Eddie Dean on DVD.

6.1
Director: Ray TaylorWriters: William LivelyStars: Eddie Dean, Copper the Horse, Roscoe AtesSummary: Eddie Dean, under orders as a U.S. Land Office agent, is trying to prevent a range war from being started between homesteaders and ranchers when a caravan of the so-called 'Nesters', start to take over land acquired by the homesteaders by a government lease. Quirt Thayer, working both sides against the middle, has his gang join with the ranchers seeking revenge against the settlers for raids on the ranchers by Quirt's henchmen. Eddie uses his friendship with Mary King, daughter of the leading rancher, to pin the guilt on the correct culprits. Written by Les Adams <[email protected]>
Also known as: Tornado Range (on a region-free DVD). 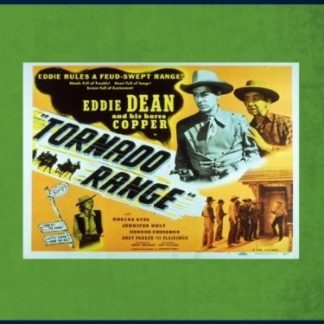