They Shall Have Music (1939) starring Jascha Heifetz on DVD


This sale is for They Shall Have Music (1939) starring Jascha Heifetz on DVD.

6.8
Director: Archie MayoWriters: Irma von Cube, John Howard LawsonStars: Jascha Heifetz, Joel McCrea, Andrea LeedsSummary: A boy from the streets of New York finds music tickets to a Heifetz concert, which rekindles his earlier interest in the violin. He subsequently runs away from home and happens across a music school for children (played by members of the Peter Meremblum California Youth Symphony Orchestra). He is taken in by kindly Professor Lawson, the head of the school and resumes violin study while sleeping in the basement of the school. Despite the best efforts of Peter and Ann to raise money, the school is about to be foreclosed upon by Flower and associates. The kids in the school, led by Frankie, try to raise money themselves, and run across Heifetz in the process. After many more well-trodden cinematic paths have been navigated, Heifetz finally is convinced to sponsor the school. Written by Butch <[email protected]> 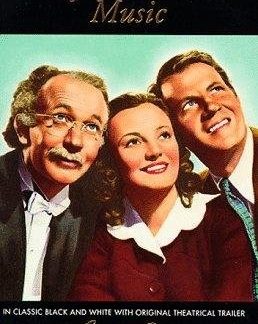