View cart “From Pink to Yellow (1963) with English Subtitles on DVD” has been added to your cart.

They Got Me Covered (1943) starring Bob Hope on DVD


This sale is for They Got Me Covered (1943) starring Bob Hope on DVD.

6.8
Director: David ButlerWriters: Harry Kurnitz, Frank FentonStars: Bob Hope, Dorothy Lamour, Lenore AubertSummary: Bumbling reporter Robert Kittredge has been fired after bungling his latest assignment. His career isn't all he's botched up: his girlfriend Chris is tired of waiting for him to marry her. When he gets a hot tip on some Nazi spies operating in Washington, D.C., he convinces Chris to help him break the story so he can get his job back. The pair soon find themselves in several awkward predicaments as they track the criminals down in a night club, a burlesque show, and face a final showdown at a beauty salon. Written by Daniel Bubbeo <[email protected]>
Also known as: They Got Me Covered (on a region-free DVD). 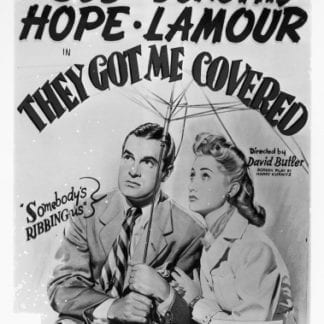