This sale is for The Yellow Rolls-Royce (1964) starring Ingrid Bergman on DVD.

Director: Anthony AsquithWriters: Terence RattiganStars: Ingrid Bergman, Rex Harrison, Shirley MacLaineSummary: Three stories about the lives and loves of those who own a certain yellow Rolls-Royce: **First purchased by Lord Charles Frinton - The Marquess of Frinton (Sir Rex Harrison) for his wife as a belated anniversary present. Lady Eloise Frinton - The Marchioness of Frinton (Jeanne Moreau) finds her own use for the vehicle, one which prompts her husband to sell the car in disgust. **Gangster Paolo Maltese's (George C. Scott's) moll, Mae Jenkins (Shirley MacLaine), thinks the Rolls is a "classy" car in which to tour Paolo's home town in Italy. When Paolo is called away to the U.S. to finish some "business", a bored Mae takes the Rolls-Royce on a spin through the country, enjoying both the sights and handsome Italian photographer Stefano (Alain Delon), who crosses her path. **By the outbreak of World War II, the car has come into the possession of socialite Gerda Millett (Ingrid Bergman). While on her way to visit Yugoslavian royalty, Gerda and the Rolls-Royce become (at first) unwitting and... Written by A.L.Beneteau <[email protected]>
Also known as: The Yellow Rolls-Royce (on a region-free DVD). 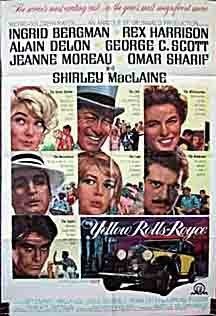