This sale is for The Warriors (1955) starring Errol Flynn on DVD.

6.0
Director: Henry LevinWriters: Daniel B. UllmanStars: Errol Flynn, Joanne Dru, Peter FinchSummary: During the fourteenth century, the Hundred-Year War between France and England ends in a truce. The English Army occupies French Aquitaine, but rebel French knights vow to continue the war and oust Edward, Prince of Wales (Errol Flynn), English ruler of French Aquitaine. Edward, Prince of Wales is the son of King Edward III (Sir Michael Hordern) of England, and he also is the heir to the English throne. The rebel French knights resent his presence in French Aquitaine and they plot to kill the Prince. When their plot fails, they kidnap his consort, Lady Joan Holland (Joanne Dru). Desperate, Prince Edward rides to her aid disguised in black armor in order to conceal his identity. After a series of valiant adventures, Edward the Black Prince and his troops do one more climactic battle against the French rebel army. Written by nufs68
Also known as: The Warriors (on a region-free DVD). 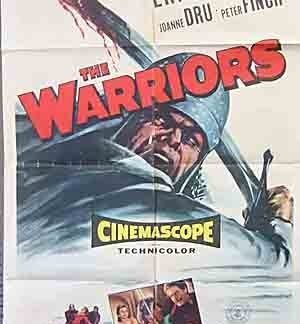