This sale is for The Texas Chainsaw Massacre 2 (1986) starring Dennis Hopper on DVD.

Director: Tobe HooperWriters: L.M. Kit Carson, Tobe HooperStars: Dennis Hopper, Caroline Williams, Jim SiedowSummary: Radio DJ Vanita 'Stretch' Brock's open request night is plagued by the annoying phone pranking of two road tripping, party-hard, hoodlums, but things take a disturbing turn when the hoodlums meet their demise at the hands of familiar chainsaw wielding maniacs. With the entire gruesome ordeal recorded on tape, Stretch seeks out the help of a former Texas Marshall who's on a personal quest of vengeance against this family of cannibals. While at first he turns her down, he eventually decides to use her tape to his advantage, asking her to air it during her request block- effectively baiting the cannibals to the radio station where he'll personally deal with them. Written by ahmetkozan 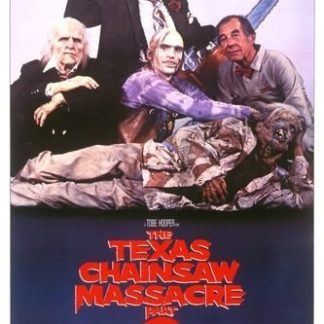