The Sisters (Le sorelle) 1969 with English Subtitles on DVD


This sale is for The Sisters (Le sorelle) 1969 with English Subtitles on DVD.

6.3
Director: Roberto MalenottiWriters: Alessandro Fallay, Roberto MalenottiStars: Nathalie Delon, Susan Strasberg, Massimo GirottiSummary: Diana's marriage has ended in divorce, so she goes to stay for a while with her younger sister Martha, whom she hadn't seen in ages. However, Diana is actually there to try to rekindle the passionate incestuous relationship that she and her sister once had until Martha eventually decided to end it and leave Diana for good. Diana accepted this at the time, but then she got married and realized that she can never love anyone like she does Martha and that she will never be happy without her. Unfortunately for her, Martha is now married to an older rich man and enjoys her married life free of Diana, even though she does cheat on her husband occasionally with other men, but he doesn't seem to mind. Diana, mad with longing and lust for her sister, tries everything she can to convince her to come back to her, but Martha would rather die than to do that.
Also known as: The Sisters (on a region-free DVD). 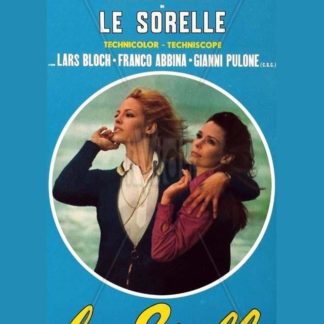