This sale is for The Saxon Charm (1948) starring Robert Montgomery on DVD.

6.7
Director: Claude BinyonWriters: Frederic Wakeman, Claude BinyonStars: Robert Montgomery, Susan Hayward, John PayneSummary: Eric Busch, a novelist/playwright, and his wife, Janet, go to New York where he arranges to have Matt Saxon, who has a reputation for ruthlessness, produce his play. Saxon insists on so many meetings, changes and revisions that it cause a rift between Eric and Janet. Saxon goes to Hollywood to get a prominent actor to play the lead but the actor, no fan of Saxon, declines. Saxon then deliberately robs his own girlfriend of her chance in Hollywood. The actor then comes to New York and offers to do the play, if someone other than Saxon is the producer. Written by Les Adams <[email protected]>
Also known as: The Saxon Charm (on a region-free DVD). 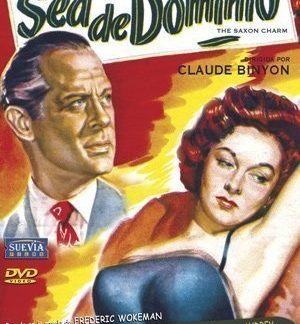