The Reward (1965) with English Subtitles on DVD


This sale is for The Reward (1965) with English Subtitles on DVD.

4.9
Director: Serge BourguignonWriters: Michael Barrett, Serge BourguignonStars: Max von Sydow, Yvette Mimieux, Efrem Zimbalist Jr.Summary: An American, Frank, threatens to kidnap his partner's son because he has double crossed him. Unfortunately the boy is accidentally killed during the confrontation and Frank has to run away. His partner, wild with rage, promises a reward of 50,000 dollars for his capture dead or alive. Scott, a crop dusting pilot has crashed into a water tank and having no adequate insurance, he is unable to repay the 12,000 pesos for the repairs. But he remembers seeing the fugitive while flying and manages to persuade Captain Carbajal to go off in pursuit of the wanted man. A group forms, composed of Carbajal, his deputy Lopez, a driver, , Luis and the Indian Joaquin. They set out across the desert, in the hope of laying hands on Frank - and Sylvia, his girlfriend, who has joined him in the meantime. Written by Guy Bellinger
Also known as: The Reward (on a region-free DVD). 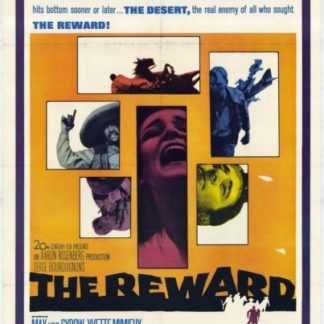