This sale is for The Nutt House (1992) starring Stephen Kearney on DVD.

3.6
Director: Adam Rifkin, Scott SpiegelWriters: Sam Raimi, Scott SpiegelStars: Stephen Kearney, Amy Yasbeck, Robert TreborSummary: Idential twins Philbert and Nathan are too much of a burden on their mother so she separates them by sending Nathan, the "bad seed", to an insane asylum where he grows up with multi personalities while Philbert becomes a well-known senator. On one typical day, Nathan escapes from the asylum to find his long-lost brother and somehow ends up at Philbert's mansion and since they both look alike, they cause some outrageously silly mishaps in which Philbert's long-suffering wife Diane and his mistress/housekeeper Miss Tress are fooled by the deception. Written by Anonymous
Also known as: The Nutt House (on a region-free DVD). 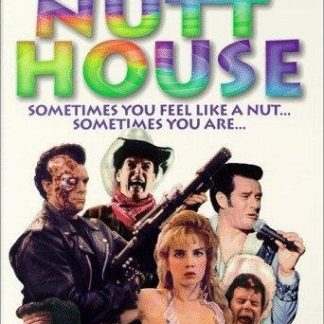