This sale is for The Narrow Corner (1933) starring Douglas Fairbanks Jr. on DVD.

6.1
Director: Alfred E. GreenWriters: W. Somerset Maugham, Robert Presnell Sr.Stars: Douglas Fairbanks Jr., Patricia Ellis, Ralph BellamySummary: Fred, an Englishmen, (Douglas Fairbanks Jr.) , wanted for murder, winds up on a fishing boat in The South Seas, run by Nichols. ( Arther Nohl). Also present is the ships' doctor (Sidney Toler) who is there to treat Nichols for a stomach disorder. One day, after swimming nude offshore;, Fred encounters Louise (Patricia Ellis), on an exotic Island, She is a little more attired, than the slightly embarrassed Fred and encourages friendly conversation. . Fred subsequently meets. Louise's fiancee Eric (Ralph Bellamy). who runs a government plantation on the Island. Louise resides there with her father and grandfather, who own the plantation. Trouble soon arrives as a romance between Fred and Louse develops. There is of course conflict between Fred and Eric. Fugitive Fred has to keep on the move as his murder charge stems from a similar circumstance Written by [email protected]
Also known as: The Narrow Corner (on a region-free DVD).

Be the first to review “The Narrow Corner (1933) starring Douglas Fairbanks Jr. on DVD” Cancel reply 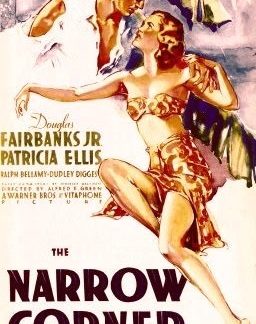