This sale is for The Honey Pot (1967) starring Rex Harrison on DVD.

6.9
Director: Joseph L. MankiewiczWriters: Frederick Knott, Thomas SterlingStars: Rex Harrison, Susan Hayward, Cliff RobertsonSummary: Inspired by a performance of his favorite play, "Volpone," twentieth century millionaire Cecil Fox (Sir Rex Harrison) devises an intricate plan to trick three of his former mistresses into believing he is dying. Although the women are wealthy in their own right, all have good reason to covet his fortune. To assist him in his scheme, Fox hires William McFly (Cliff Robertson), a gigolo and sometime actor, to act as his secretary/servant. Fox is soon visited at his "deathbed" by the three former mistresses: Merle McGill (Edie Adams), a fading Hollywood sex symbol; Princess Dominique (Capucine), who once took a cruise on Fox's yacht; and Mrs. Lone Star Crockett Sheridan (Susan Hayward), a Texas hypochondriac who travels with an enigmatic nurse/companion (Dame Maggie Smith). As Fox and McFly act out the charade, things take an unexpected turn from comical farce to full-blown murder mystery. Written by alfiehitchie
Also known as: The Honey Pot (on a region-free DVD). 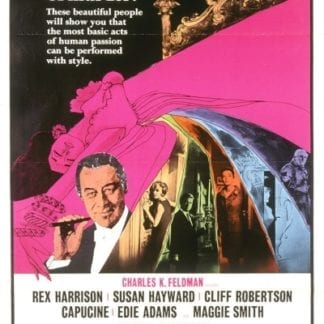