This sale is for The Lindbergh Kidnapping Case (1976) starring Cliff De Young on DVD.

6.7
Director: Buzz KulikWriters: J.P. MillerStars: Cliff De Young, Anthony Hopkins, Denise AlexanderSummary: When the child of world-famous aviator Charles A. Lindbergh (Cliff De Young) is kidnapped from his New Jersey home, speculation about who took him and why grips the entire nation. During the subsequent investigation, the child is found murdered, and a German carpenter named Bruno Richard Hauptmann (Sir Anthony Hopkins) emerges as the primary suspect. The media buzz surrounding the trial is enormous, and while the facts seem to be against Hauptmann, the wild theories nevertheless continue to proliferate. Written by Jwelch5742
Also known as: The Lindbergh Kidnapping Case (on a region-free DVD). 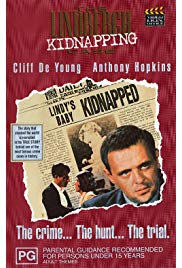