The Law vs. Billy the Kid (1954) starring Scott Brady on DVD

4.9
Director: William CastleWriters: Bernard GordonStars: Scott Brady, Betta St. John, James GriffithSummary: Young William Bonney inspires the faith and friendship of Pat Garrett, despite Bonney's violent past. Garrett believes that Billy can make a better life for himself, a sentiment shared by rancher John Tunstall, who befriends Billy and gives him a job. Billy falls in love with Tunstall's niece, Nita, but this outrages Tunstall's foreman, Bob Ollinger, who exposes Billy's past as outlaw Billy the Kid. When Billy's new friend, John Tunstall, is murdered, he goes on a rampage of revenge, and Pat Garrett, now a lawman, is forced to go after his young friend. Written by Jim Beaver <[email protected]>

Be the first to review “The Law vs. Billy the Kid (1954) starring Scott Brady on DVD” Cancel reply 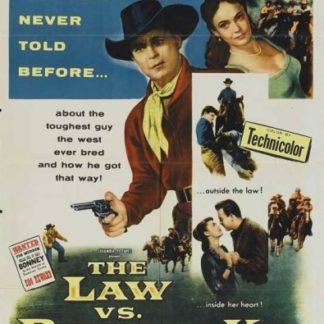