This sale is for The Last Tasmanian (1978) starring Leo McKern on DVD.

7.8
Director: Tom HaydonWriters: Tom Haydon, Rhys JonesStars: Leo McKern, Jim Allen, Rhys JonesSummary: The Tasmanians were a distinct people, isolated from Australia and the rest of the world for 12,000 years. In 1803, British colonisation began and in 1876, Truganini died. For a long time she was thought to have been the last full-blood and tribal Tasmanian Aboriginal. Within her one lifetime, a whole society and culture were removed from the face of the earth. The Last Tasmanian had an extraordinary impact upon a very wide public in the years following its cinema release in 1978. It is a deeply moving and finely crafted work which has been credited by historians for substantially altering Australian perceptions of the colonial past. This pioneering achievement in historical detective work opens with the State funeral in 1976 for the remains of Truganini who died 100 years before. She was the last full-blood Aborigine in Tasmania. The film follows the work of Dr Rhys Jones, archaeologist and anthropologist, in his search to discover and comprehend the life and death of the Tasmanian ... Written by Paul Gerard Kennedy
Also known as: The Last Tasmanian (on a region-free DVD). 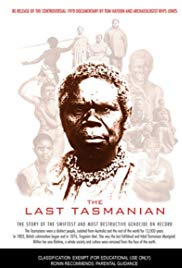