The Honeymoon Machine (1961) with English Subtitles on DVD


This sale is for The Honeymoon Machine (1961) with English Subtitles on DVD.

6.2
Director: Richard ThorpeWriters: Lorenzo Semple Jr., George WellsStars: Steve McQueen, Brigid Bazlen, Jim HuttonSummary: The crew aboard the USS Elmira are working on a project, code named Operation Honeymoon. At the operation's core is the testing of the Magnetic Analyzer Computing Synchrotron, or MACS for short, which is a smart computer designed to do among other things determine where missiles are going to land. Civilian Jason Eldridge is the scientific mastermind aboard in charge of MACS' operation. His friend aboard, Lieutenant Ferguson Howard, sees other possible uses for MACS. He wants to know if MACS, if given the proper data, can accurately predict games of chance, such as those found in casinos. After discussing the situation, Fergie and Jason decide the game which MACS can predict the most accurately is roulette. They decide to test MACS' abilities, and possibly get rich, at their next port of call where there is a casino, namely Venice. They plan on using a system of Morse Code light signals from the ship to shore to transmit the information. Although they go ahead with their plan, they are... Written by Huggo
Also known as: The Honeymoon Machine (on a region-free DVD). 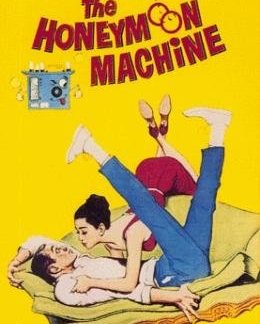