This sale is for The Guilty (2000) starring Bill Pullman on DVD.

6.2
Director: Anthony WallerWriters: Simon Burke, William DaviesStars: Bill Pullman, Devon Sawa, Gabrielle AnwarSummary: Young Nathan Corrigan has just been released from prison, he who was serving a sentence for auto theft. He is basically a good but misguided person, due in part to the company he keeps, namely the friends he's known since high school and his partners in crime, Leo and Dennis, and feeling unloved or unaccepted by his preacher father, Martin Corrigan. The feeling associated with that latter sentiment is strengthened when his mother, Maddy Corrigan, confesses to him that Martin is not his biological father, that person being who was then a law student named Callum Crane with who she had a one time liaison and who she never told about the pregnancy. Nathan decides to search for Callum. Meanwhile, Callum is now married and a high powered lawyer, whose colleagues in the know consider amoral and devious. Just before he is appointed a federal judge, Callum rapes Sophie Lennon, a secretary new to the law firm where he works. Because of that situation, Callum has Sophie fired. Feeling otherwise... Written by Huggo
Also known as: The Guilty (on a region-free DVD). 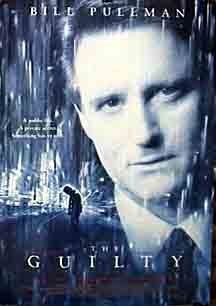