This sale is for The Great Hospital Mystery (1937) starring Jane Darwell on DVD.

6.5
Director: James TinlingWriters: Mignon G. Eberhart, Bess MeredythStars: Jane Darwell, Sig Ruman, Sally BlaneSummary: The first of three films made featuring the Nurse Sarah Keate character created by Mignon Eberhardt. This 20th Century-Fox film was followed by two from Warner Bros. in 1938 ("Mystery House" and "The Patient in Room 18"), both starring Ann Sheridan in the role played here by Jane Darwell, who was, despite source that seems to think otherwise, first-billed in this film with her name on the posters twice the size of that of Sig Rumann(as billed in this film), Sally Blane, Thomas Beck and Joan Davis. The story has nurse Ann Smith, with the knowledge of her night supervisor Sarah Keate, smuggling her brother Allen Tracy into the hospital as a patient of Doctor Taggert, in order to hide him from gunmen sworn to get him. Gangster Mortimer Beatty is admitted to the room next to Tracy's. Ann's patient is found dead, but the dead man is not Tracy but a charity patient who had died days before, but now has some fresh bullet wounds in his body. Ann's sweetheart, hospital physician David McKerry,... Written by Les Adams <[email protected]>
Also known as: The Great Hospital Mystery (on a region-free DVD). 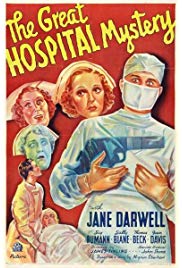