The Double Man (1967) with English Subtitles on DVD


This sale is for The Double Man (1967) with English Subtitles on DVD.

5.9
Director: Franklin J. SchaffnerWriters: Frank Tarloff, Alfred HayesStars: Yul Brynner, Britt Ekland, Clive RevillSummary: Following notification of the death of his son, in a skiing accident in the Austrian Alps, the cold and emotion-less widower Dan Slater, a high ranking member of the CIA, travels to Austria for the funeral. Dan is mysteriously provided evidence of foul play in his son's death and he decides to investigate. His friend, a former undercover operative, Frank Wheatley, who operates the Internationl School where Dan left his son in care proves useless as Dan seeks out the murderers. Eventually, Dan finds a witness who was on the ski slope at the time of the accident, Gina, the companion of wealthy socialite Mrs. Carrington. Gina identifies two male strangers and Dan is led into a cleverly thought out trap laid by Berthold, a Russian agent. The Russians plan to kidnap Slater, do away with him and substitute him with an exact double in order to obtain a mole in the highest echelons of the CIA. Will Berthold succeed or will Frank and Gina realize something is amiss and rescue Slater? Written by Mark Smith <[email protected]>
Also known as: The Double Man (on a region-free DVD). 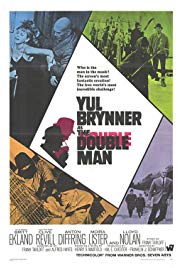