This sale is for The Cool World (1963) starring Rony Clanton on DVD.

6.6
Director: Shirley ClarkeWriters: Shirley Clarke, Carl LeeStars: Rony Clanton, Carl Lee, Yolanda RodríguezSummary: Filmmaker Shirley Clarke ("The Connection") directs this powerful, stark semi-documentary look at the horrors of Harlem ghetto slum life filled with drugs, violence, human misery, and a sense of despair due to the racial prejudices of American society. There is no patronizing of the black race in this cinematic cry for justice. A fifteen-year-old boy called Duke is ambitious to buy a "piece" (a gun) from an adult racketeer named Priest, to become president of the gang to which he belongs, and to return them to active "bopping" (gang fighting) which has declined in Harlem. It is a clearly patent allegory of an attempt by Duke to attain manhood and identity in the only way accessible to him - the antisocial one. Written by alfiehitchie
Also known as: The Cool World (on a region-free DVD). 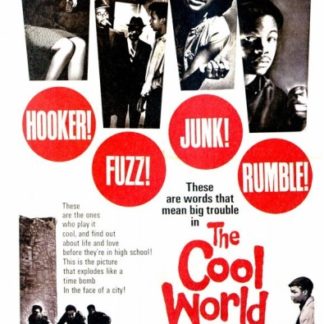