The Affairs of Dobie Gillis (1953) starring Debbie Reynolds on DVD


This sale is for The Affairs of Dobie Gillis (1953) starring Debbie Reynolds on DVD.

6.1
Director: Don WeisWriters: Max ShulmanStars: Debbie Reynolds, Bobby Van, Barbara RuickSummary: Grainbelt University has one attraction for Dobie Gillis - women, especially Pansy Hammer. Pansy's father, even though and maybe because she says she's in dreamville, does not share her affection for Dobie. An English essay which almost revolutionizes English instruction, and Dobie's role in a chemistry lab explosion convinces Mr. Hammer he is right. Pansy is sent off broken-hearted to an Eastern school, but with the help of Happy Stella Kolawski's all-girl band, several hundred students and an enraged police force, Dobie secures Pansy's return to Grainbelt. Written by Les Adams <[email protected]>
Also known as: The Affairs of Dobie Gillis (on a region-free DVD). 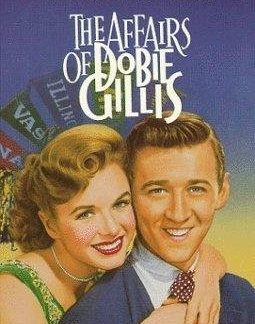