This sale is for Term of Trial (1962) starring Laurence Olivier on DVD.

7.1
Director: Peter GlenvilleWriters: James Barlow, Peter GlenvilleStars: Laurence Olivier, Simone Signoret, Sarah MilesSummary: Graham Weir is an alcoholic schoolteacher whose criminal record for refusing to fight during World War II has prevented him from progressing further in his teaching career. He is looked upon with disdain by his headmaster, his pupils, and even his wife. The one person who appreciates his shyness and warmth is one of his pupils, Shirley Taylor. After Weir offers to give her free private tuition, the pupil slowly falls in love with her teacher. She treats this as an obsession that can never be fulfilled, but in her frustration and naivety, she reveals her true feelings for Weir and offers to sleep with him. Weir gently refuses and intends to forget about the episode but a new problem surfaces in his life when Taylor accuses him of indecent assault. Written by David Claydon <[email protected]>
Also known as: Term of Trial (on a region-free DVD). 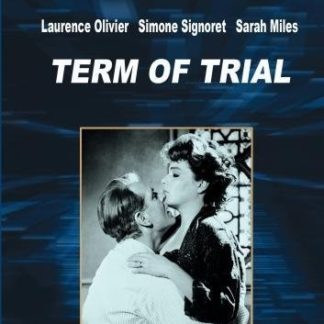