This sale is for Tell No Tales (1939) starring Melvyn Douglas on DVD.

6.6
Director: Leslie FentonWriters: Lionel Houser, Pauline LondonStars: Melvyn Douglas, Louise Platt, Gene LockhartSummary: Michael Cassidy is the managing-editor of a small newspaper which is about to be closed down by its new owner, Matthew Cooper, who owns another newspaper in the city and only bought the second one to get rid of the competition. There has been a kidnapping in the city and Cassidy gets one of the hundred-dollar-bills, paid in ransom, at a saloon and begins to trace the bill backwards step-by-step to get to the kidnappers. He is aided by Ellen Frazier, a schoolteacher, who is the only eye-witness. Each step leads to a miniature drama of it own to...to the widow, Ruby Alley, at the wake of her dead prizefighter-husband...to the owner of a gambling house, Arno, who discovers that his brother, the cashier of the casino, is involved in the kidnapping...to a husband who is not thrilled to learn his wife ahas been cheating on him...before he finds the kidnappers. Written by Les Adams <[email protected]>
Also known as: Tell No Tales (on a region-free DVD). 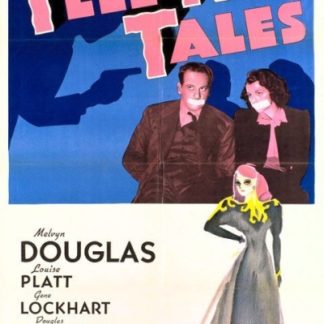